INTERVIEWER
What about the novel you’re writing while you’re here
McCARTHY
It’s called The Group, and it’s about eight Vassar girls. It starts with the inauguration of Roosevelt, and—well, at first it was going to carry them up to the present time, but then I decided to stop at the inauguration of Eisenhower. It was conceived as a kind of mock-chronicle novel. It’s a novel about the idea of progress, really. The idea of progress seen in the female sphere, the feminine sphere. You know, home economics, architecture, domestic technology, contraception, childbearing; the study of technology in the home, in the playpen, in the bed. It’s supposed to be the history of the loss of faith in progress, in the idea of progress, during that twenty-year period.
INTERVIEWER
Are these eight Vassar girls patterned more or less after ones you knew when you were there in college?

McCARTHY
Some of them are drawn pretty much from life, and some of them are rather composite. I’ve tried to keep myself out of this book. Oh, and all their mothers are in it. That’s the part I almost like the best.

INTERVIEWER
Just the mothers, not the fathers?

McCARTHY
Not the fathers. The fathers vaguely figure, offstage and so on, but the mothers are really monumentally present! 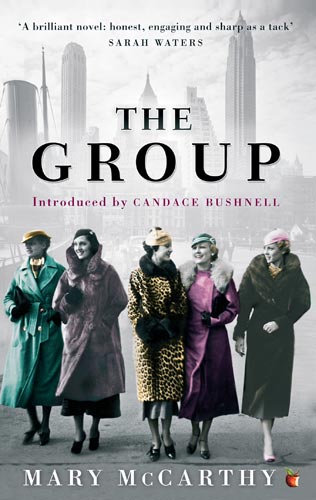 
On the eve of its reissue, Elizabeth Day assesses Mary McCarthy's seminal novel, The Group,


Although McCarthy repeatedly distanced herself from the idea of being a "feminist" writer (she once described feminism as a cocktail of "self-pity, shrillness and greed"), her insistence on seeing women as they truly were, rather than how society wanted them to be, was in its own way revolutionary. The Group was published at a time of considerable flux in America. It was the year that Kennedy was assassinated, a time when the myth of the contented domesticity of previous generations was beginning to be challenged. A few months before it came out, Betty Friedan had published The ­ Feminine Mystique, a sociological study that brought to light the lack of fulfilment in women's lives based on the results of a questionnaire sent to 200 of her university contemporaries. Friedan called it "the problem with no name": the nagging dissatisfaction that lay at the heart of many women's experience despite a gloss of financial security.
McCarthy's novel was set in 1933, but it dealt with precisely the same issues that Friedan had identified. In The Group, the female characters set out to make their own way in Roosevelt's New Deal America, only to discover that they are just as economically and emotionally dependent on men as their mothers were. They believe in romantic love even though it costs them their independence and their idealistic, liberal politics come to nothing when the novel ends with the outbreak of the Second World War.
It was the women's submissiveness that most enraged Norman Mailer, who claimed that McCarthy's novel was fatally diminished by the fact that none of her characters has "the power or dedication to wish to force events", while conspicuously missing the point that it was precisely this enforced passivity that McCarthy wished to highlight.