Mary McCarthy nailing, just completely nailing, her famous review of “The Naked Lunch” (“This must be the first space novel, the first serious piece of science fiction – the others are entertainments.” ) 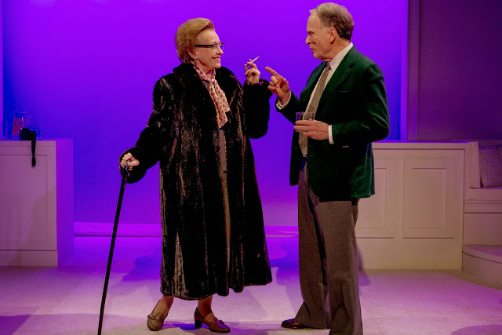 BOTTOM LINE: A brilliantly-written, fast-paced, and somewhat fictionalized account of the literary feud between playwright/memoirist Lillian Hellman and critic/novelist Mary McCarthy.
When Brian Richard Mori’s Hellman v. McCarthy begins, the auditorium lights are still on and most of the people in the room are chatting with their friends, dates, or neighbors. Two stagehands are visible, presumably putting the final touches on the set and shouting directions to one another. A minute or two passes before the audience gets it -- they are being readied to watch legendary talk show host Dick Cavett conduct a live, on-camera, interview. And lest they forget, as soon as Cavett walks on, they’re reminded that his nearly 50-year career has included stints on ABC, CBS, PBS, USA and CNBC.
Now 78, Cavett plays himself in Mori’s compelling drama. Indeed, when he steps onstage his command is obvious. There’s witty banter and corny schtick alongside clever jokes and self-deprecating commentary. He then introduces that evening’s guest, writer Mary McCarthy (played with arrogance and smug self-satisfaction by the terrific Marcia Rodd) best known for penning Memories of a Catholic Girlhood (1957) and The Group (1963). Cavett has invited McCarthy onto the program to discuss her latest effort, a book called Cannibals and Missionaries that is scheduled to be released shortly after the show’s October 1979 taping. The Q&A is fairly predictable, at least until Cavett asks McCarthy which contemporary writers she thinks are overrated. Without missing a beat she names three: Pearl S. Buck, John Steinbeck, and Lillian Hellman. Not only does she dub the latter a “windbag,” she announces -- with imperious hostility -- that “every word she writes is a lie, including ‘and’ and ‘the.’”
Hellman (played by the excellent Roberta Maxwell) does not take kindly to McCarthy’s characterization and since money is no object, she hires attorney Lester Marshall (Peter Brouwer) to sue McCarthy, PBS, and Cavett for libel. The rest of Mori’s play is a retelling of what happened as the litigation -- dubbed “the greatest literary feud in modern American history” by the press -- unfolds. It’s often tense, albeit with a sprinkling of humor, and raises important concerns about freedom of expression and the First Amendment.
As the play proceeds we are also made privy to the back story and learn that McCarthy and Hellman had disliked one another for decades, since serendipitously meeting at a 1948 social gathering on the campus of Sarah Lawrence College. McCarthy saw Hellman as an apologist for Stalin, while Hellman saw McCarthy as a mealy-mouthed liberal who stood for nothing. That Hellman’s books and plays sold millions while McCarthy’s did not certainly added to McCarthy’s hatred of her more successful peer.
That said, Hellman was widely known to be an irascible, mean-spirited, and contrary sort who alienated just about everyone. This made McCarthy -- no shrinking violet herself -- the public favorite during the four-plus years it took for the case to wind its way through the courts. Sadly, the lawsuit ended only because Hellman died before it went to trial. McCarthy was disappointed. “I did not want her to die,” she told reporters. “I wanted her to lose in court.”
Hellman v. McCarthy includes one imagined scene in which the two grand dames meet. It’s both tragic and absurd to see the rivals go at one another:
“You never did disavow the Moscow trials,” McCarthy blasts.
“I am a Marxist,” Hellman replies.
“You are a liar,” McCarthy retorts.
Needless to say, rapprochement was not in the cards for this quick-tempered duo.
As for Cavett, near the end of the production he confides that he came to see the case as little more than “two literary lionesses fighting over a zebra carcass.” And so it was. But Mori’s crisp writing and the cast’s pitch-perfect delivery, makes for an exceptionally entertaining and provocative night of theater.
The question at its core remains relevant: should there be limits on free speech or should we protect the right to voice the outrageous and the offensive? In fact, a week after the passing of Fred Phelps who, as head of the Westboro Baptist Church gained national notoriety after picketing the 1998 funeral of Matthew Shepard with a sign proclaiming that “God hates fags,” the debate continues to elicit passionate sentiments and arouse deep seated fears.
Posted by Unknown at 15:40 No comments:

The New York Review of Books

In anticipation of the Review’s 50th anniversary, editor Robert Silvers and publisher Rea Hederman came to Martin Scorsese with the idea of making a film about the magazine. An avid reader since his college days at NYU where he “wouldn’t miss an issue,” Scorsese eagerly agreed.
It’s no accident that the sole source of consistent, fact based analysis in the United States following the attacks of September 11, 2001 was found within the pages of The New York Review of Books. In the early days of the “War on Terror” and the build up to the wars in Afghanistan and Iraq, the Review published many pieces that even now, 12 years later, still appear truthful and incisive. “Torture and Truth,” Mark Danner’s article on enhanced interrogation, based on a confidential Red Cross report, was a watershed moment when many people began to see the events of the Bush Administration in a new light. This is one of many crowning moments for The New York Review of Books.

No one could stop us. We could do what we wanted in any wayRobert Silvers, Editor - The New York Review of Books

In its inaugural issue 50 years ago, the Review distinguished itself immediately with an enviable roster of some of the most illustrious writers and thinkers of their time: Norman Mailer, Gore Vidal, Susan Sontag, William Styron, W.H. Auden, Mary McCarthy and many others who would go on to do some of their best work within the pages of the Review. The film will tell the story of the shared spirit of inspiration that brought that first issue to press: Elizabeth Hardwick writing “The Decline of Book Reviewing” for Harpers magazine, which argued that a new kind of literary journal – assionate, engaged, truly literary – was needed. The impromptu dinner party that brought Hardwick and her husband Robert Lowell to the table of their neighbours, book editors Jason and Barbara Epstein. Jason Epstein’s flash of clarity that a New York City newspaper strike had given them a golden opportunity to launch the publication of their dreams. The next day Jason Epstein called Robert Silvers to recruit him as editor and he in turn recruited Barbara. The founders launched the Review from Hardwick’s premise, but it grew large part from the hard work, imagination and sensibility of its editors, Barbara Epstein and Robert Silvers. 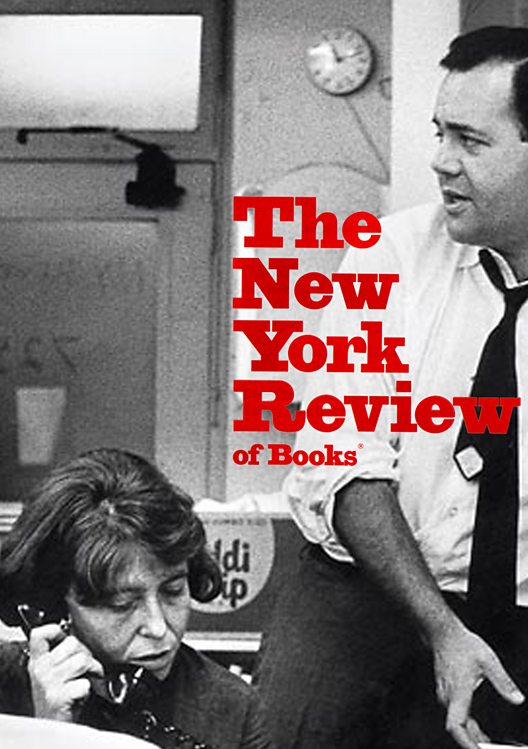 The greatest literary feud in modern American history began on January 25, 1980 when literary critic Mary McCarthy appeared as a guest on "The Dick Cavett Show" and declared that "every word [playwright Lillian Hellman] writes is a lie, including 'and' and 'the.'" Hellman went ballistic and sued McCarthy for libel, sparking a law suit that spanned more than four years. HELLMAN v. McCARTHY is a roller coaster ride filled with comedy and pathos.

As previously announced, Emmy Award-winner Dick Cavett ("The Dick Cavett Show," Into the Woods, The Rocky Horror Show) is set to portray himself, recreating his role in the historical events depicted in HELLMAN v. McCARTHY.

“Yet in reality nothing is as bad as it seems (or as in logic, it ought to be).” Mary McCarthy and her son, Ruel, at their home in Wellfleet, Massachusetts, from McCarthy’s feature on her marriage to Edmund Wilson in The Paris Review. Writes McCarthy, “Yet in reality nothing is as bad as it seems (or as in logic, it ought to be).”
Posted by Unknown at 03:28 No comments: