Coming across a timeline in York Notes recently, a student in my A2 Lit. class wondered how significant it was that James I had ordered the demolition of London’s brothels a year before the first performance of Measure for Measure. A very good question and one which mainstream criticism, we quickly discovered, wasn't keen to address. Fortunately, a quick internet search threw up a number of interesting websites, which began to answer that specific question, and highlighted fresh social and literary contexts which gave us a completely new perspective on Measure for Measure.

Wrong Side of the River: London’s disreputable South Bank in the 16th and 17th century by Jessica Browner describes how London’s complex economic and social development turned its main southern suburb, Southwark, into a ‘bastard sanctuary’, an area relatively free from the judicial control of the City. Overcrowded and cosmopolitan, the south bank area became notorious for vagrancy and prostitution, as well as the location, after 1599, for most of London’s theatres. According to Browner, Southwark:
grew parasitically, making its living by becoming the pleasure-ground for the more closely regulated community to the north. 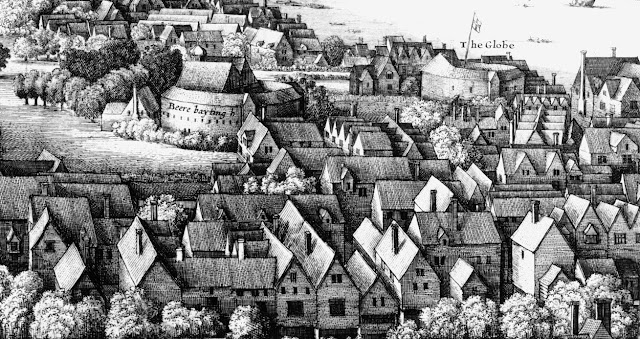 Sexual politics in Southwark
Connecting this environment with Measure for Measure is not difficult. Southwark’s ‘moral degeneracy’ was continually denounced by Puritan pamphleteers and preachers, using the kind of arguments and language characteristic of Angelo and others in the play. In terms of legal response, Browner describes ‘the numerous attempts to pass civil laws to condemn and punish sexual laxness’ by both Crown and Parliament. These include James I’s first royal proclamation in 1603, to pull down buildings within three miles of London in order to drive out the ‘idle, indigent, dissolute and dangerous persons’ pestering the city and causing plague. Whores and bawds were usually numbered among such dissolute persons. In this context Measure for Measure must have seemed like cutting edge drama to the Jacobean playgoer. Indeed, the numerous prison scenes in the play may well have struck other chords with contemporary audiences, since the district of Southwark had no less than five prisons, including the Clink, the Compter and the Marshalsea. Clearly, to my group at least, this suggested that Shakespeare’s purpose in exploring the use of legal decrees and institutions, to control and punish ‘immoral’ behaviour, was not simply an abstract discussion of ethical codes, but was, in fact, firmly rooted in the sexual politics of the period.

Close connections
And it seems it wasn’t only Shakespeare who had an interest in dramatising this particular issue. From the evidence of our web search, there appear to be a number of plays by Shakespeare’s contemporaries (and collaborators) with close connections to Measure for Measure. For example, it can be established beyond reasonable doubt that Thomas Dekker’s The Honest Whore (1604) and Thomas Middleton’s A Mad World, My Masters (1606) have significant inter-textual parallels with Measure for Measure. Both Dekker and Shakespeare create similar roles for their Dukes. In Measure for Measure the Duke orders the suburban brothels demolished, as does the Duke in The Honest Whore. Both then go on to visit prisons in disguise, finally to dispense justice and tie up any loose ends, mainly by channeling sexual desire into the socially acceptable institution of marriage. For both writers, the correction of rampant vice and permissive sexuality appears to take two forms: self-regulation and state regulation. For Middleton in A Mad World, setting things straight at the end also involved a comic twist of justice, whereby a morally dissolute male character, Richard Follywit, is forced to marry a prostitute in a final scene, a resolution echoing Lucio’s fate in Measure for Measure.

City comedies
For my class, one of the most interesting contexts to emerge from the articles by Howard and Frassinelli was the existence of a category of seventeenth-century drama that they had not encountered before, namely, the City Comedy, within which Measure For Measure, The Honest Whore, and A Mad World, My Masters can be placed – along with at least a dozen other plays of the period. We discovered a variety of critical definitions for this sub-genre. Brian Gibbins wrote that the city comedy:

may be distinguished from other kinds of Jacobean comedy by their critical and satiric design, their urban setting, their exclusion of material appropriate to romance, fairy tale, sentimental legend or patriotic chronicle


while Jane Howard suggests that:

city comedy focuses attention on...city gallants and the occasional court figure or low-life type such as the prostitute or canting rogue.


the complex process of conducting economic and social relations in a newly forming urban environment.

Though many city comedies were set outside London – The Honest Whore is ostensibly set in Milan, Measure For Measure in Vienna – Jean Howard argues that:


London is the subtextual referent in nearly all of them...The othering of vice is never fully accomplished...The face of England keeps peeping through...

That both these plays focus on men who succumb to raging desires and passions leads her to consider the needs of their contemporary audiences:


One can only speculate about the historic reasons why watching spectacles of men out of control would have been pleasurable to at least some London playgoers in the period following 1603...it may have been connected to the cultural trauma following the 1603 plague, one of the worst to hit London in the entire Elizabethan and Jacobean period. The spectacle of people given over to moral degeneracy may have had a cathartic effect. Rehearsing vice, the theatre could also stage its punishment; exorcise it.

Taken together, the overall effect that these ‘new’ perspectives might have on our interpretation of Angelo’s hypocrisy, or Claudio’s criminalization or the Duke’s final verdict, has yet to be fully assessed by my students, but most would agree, I think, that the journey which began with a York Notes reference has been a more rewarding contextual experience than, perhaps, the usual debate about biblical concepts of mercy and retribution.