side from her sheer skill as a writer, her gift for the clean, knife-edged satiric shaft, Mary McCarthy has made her mark chiefly as an analyst of the cerebral fringe. The intellectual and the would-be intellectual in their several callings - this is the company she keeps and on which she casts a cold eye brightly: an eye undimmed and undeterred by the milk of human kindness. Some may deplore her disclosures, others bridle at them; it is difficult to substantiate flaws in them.
The intellectual oasis focused with a serene and expert competence by Miss McCarthy in her new novel, "The Groves of Academe," is a middle-sized experimental college that appears to be a distillation of Sarah Lawrence, Bennington and Bard.
At Jocelyn (not too far from New York and New Haven), the tuition is high, the student body handpicked and heterogeneous, the faculty made up - at a ratio of one instructor to every seven students - of "migrants from the centers of progressive orthodoxy," a loosely knit company in whom the spirit of free inquiry is rife.
Over this uneven assembly presides Maynard Hoar, a buoyant and boyish administrator dedicated to the individual tutorial (as a teaching method) and the liberal view (as a professional stand). "Like all such official types, he specialized in being his own antithesis: strong but understanding, boisterous but grave, pragmatic but speculative when need be. The necessity of encompassing such opposites had left him with a little wobble of uncertainty in the center of his personality, which made other people *** feel embarrassed by him."
This somewhat hodgepodge, avant-garde Jocelyn set-up, Miss McCarthy makes clear as diamonds. The pagan and peripheral atmosphere it fosters is conducive to political ambiguity, to frenzies over gnats (which are mistaken for camels), to fractious breezes and sudden squalls.
The immediate tempest in the Jocelyn teapot blows up over the threatened dismissal from the faculty of Henry Mulcahy, prophet of modern literature and of James Joyce in particular, arch-irreconcilable, and insatiable victim of academic witch hunts, whom Hoar has taken on as a public avowal of academic freedom.
"A tall soft-bellied, lisping man with a tense, mushroom-white face, rimless bifocals, and graying thin red hair," writes Miss McCarthy of Mulcahy, "he was intermittently aware of a quality of personal unattractiveness that emanated from him like a miasma: this made him self-pitying, uxorious, and addicted also to self-love, for he associated it with his destiny as a portent of some personal epiphany *** He carried an ashplant stick, in imitation of Joyce's Stephen Dedalus; subscribed to Science and Society, the Communist scholarly publication; and proclaimed the Irish, his ancestors, to be the ten lost tribes of Israel."
While Mulcahy's incensed colleagues rally to his defense, resign, form deputations, while they freely inquire en masse, in splinter conspiracies and in lonely vigils, Mulcahy himself moves against Hoar with the furious guile of a marmoset attacked by a cobra.
Mulcahy's pettifogging strategy of lies and half-truths, of shifts and reversals, his unscrupulous use of his students and friends, of a domestic misfortune, and of the embarrassing possibility that he is, after all, a card-carrying Communist, are expedients based on a solitary ethic: his right as a man of superior intellect, in his middle years with a family of five, to food, shelter, and a kind of blanket amnesty.
That the calamitous and dogged Mulcahy manages to elicit from the reader (as he does from the more charitable of his disenchanted defenders) a sneaking, if ill-founded, compassion is a tribute to Miss McCarthy's satiric manner, which is based on a stunning, narrowly aimed accuracy rather than exaggeration. While she provides her specimens of men and mores with few softening extra-curriculum features, neither does she deny them their humanity by making caricatures of them
Miss McCarthy's report on the Jocelynians - down to the magnificent lady poet who "turned her whole body from the waist when addressed by a new interlocutor, as though she were an obliging ear-trumpet maneuvering into position to take account of some strange new noise reaching her from afar" - is fierce and faithful. And, for anyone interested in the conduct or our least orthodox campuses, mortally entertaining.
Miss Morris is fiction editor of Harper's Bazaar. 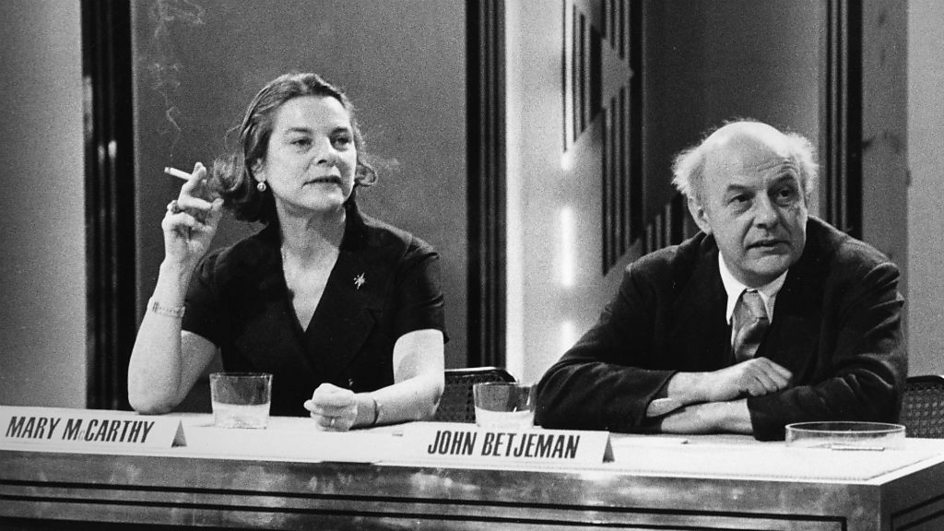 Come friendly bombs and fall on Slough!
It isn't fit for humans now,
There isn't grass to graze a cow.
Swarm over, Death!

Mess up the mess they call a town-
A house for ninety-seven down
And once a week a half a crown
For twenty years.

And get that man with double chin
Who'll always cheat and always win,
Who washes his repulsive skin
In women's tears:

And smash his desk of polished oak
And smash his hands so used to stroke
And stop his boring dirty joke
And make him yell.

But spare the bald young clerks who add
The profits of the stinking cad;
It's not their fault that they are mad,
They've tasted Hell.

And talk of sport and makes of cars
In various bogus-Tudor bars
And daren't look up and see the stars
But belch instead.

In labour-saving homes, with care
Their wives frizz out peroxide hair
And dry it in synthetic air
And paint their nails.

Come, friendly bombs and fall on Slough
To get it ready for the plough.
The cabbages are coming now;
The earth exhales.

If MM were alive today, would she be an active supporter of Julian Assange and Bradley Manning? Of course she would - no two ways about it. What leads me to this no-brainer ? Her unwavering opposition to US Empire building in Vietnam for one, and her lifelong pursuit of the truth, political and personal for another. Today's Truthout interview with Julian Assange underlines that the tradition of the principled, courageous American dissident, which McCarthy played a leading role in forging, is far from dead.

MARY McCARTHY would have been 100 this year, a milestone commemorated last spring by her alma mater, Vassar College, and again last Tuesday, at the American Library in Paris.Mary McCarthy, the American writer, was known also for her elegant style. 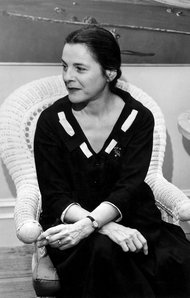 Ms. McCarthy, who died in 1989 at age 77, also created an aura, trading up from her scruffy image at Vassar to an elegant look all her own.
“If you were to make a movie of Mary McCarthy’s life,” the editor William Abrahams told Ms. Kiernan in the early 1990s, “Grace Kelly could have played the part.”
Could we possibly be having a McCarthy Moment in fashion? This season’s little black cutaway dress from Balenciaga? Or that pretty tie-neck blouse from Lanvin (just look at the author’s portrait-sitting with Cecil Beaton)? She visited both design houses and shopped for leather goods at Mark Cross, cashmere at Brooks Brothers, suits at Bonwit Teller and gloves and scarves at Hermès. All last summer we had espadrilles (hers came from Lanvin); this fall features 1940s-ish cropped jackets, and Williamsburg, Brooklyn, is grooving on Peter Pan collars.
“She combined sexy and tailored,” Ms. Kiernan said. “It’s cool now.”
Many female writers whom Ms. McCarthy inspired intellectually reflect her style as well. A. M. Homes’s new McCarthy-ish novel, “May We Be Forgiven,” earned her an austere, short-waisted photo straight out of the McCarthy playbook. The cover art of Susanna Moore’s latest, a World War II novel called “The Life of Objects,” elicits a McCarthy double-take: a woman’s photograph from the ’30s, in profile, naturally, hair in a bun.
Mentioning her name evokes not only the extraordinary number of images of the writer published over the years, but “a literary figure, a political figure, an urbane figure, a very witty figure who had honesty and wasn’t shy about expressing her opinions,” said Ronald Patkus, who organized the Vassar show. “It’s time for people to think about the role she played in the early and mid-20th century.”
Claire Messud, a novelist and critic, refers to the intertwining of Ms. McCarthy’s appearance and pointed intellect as a stance inherited from Edith Wharton and “the glamorous Europeans, like Louise de Vilmorin or the Mitfords or Elizabeth Bowen.”
She added, “McCarthy was probably one of the first female intellectuals I was aware of, and there was this sense of the presentation of yourself as not so much distinctive as elegant, of presenting yourself with respect — self-respect was manifest.”
This packs a particular relevance for young female writers today, said Elissa Schappell, a novelist and a founding editor of the literary magazine Tin House.
“The way she looked had the mark of someone who knows herself,” she said. “Like with her inner life and writing: she could be zingy and ruthless but never sloppy. There was a certain precision and candor, very incisive and sharp. I didn’t know she wore designer clothing, but it doesn’t surprise me. There’s always something very clean, thought-out. The look was very curated.”

The process of re-branding MM has begun. If she can't be ignored or rubbed out of American cultural and political life, then she must be gutted, deracinated and re-packaged as the original Sex in the City girl or some other such moronic nonsense.

To recall the real MM we need to ask
ourselves, what would she be holding now?

A placard saying 'I'm Bradley Manning' or a
copy of Vogue?