"One of America’s problems is an inability to see itself." MM on the end of the Vietnam War (final part, from NYRB 1975)

If anything has been added it is the smell of vengefulness associated with the Mayagüezepisode, typical, I fear, of the current mood of this moody nation. It is not proceeding just from the White House and Capitol Hill. 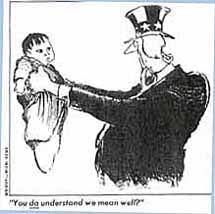 We read that the American people want to forget about Vietnam; they are sick of it. That, obviously, is the opposite of learning a lesson, where a fact or an experience is imprinted on the memory, with cautionary results. I admit that I myself hoped last summer during the House Judiciary Committee hearings that Vietnam and Watergate, between them, would have caused us, at least, to do some self-questioning. The first awful intimation that this was not so came with the orphan airlift. The competition for Vietnamese babies made clear that Americans were still intent on mass demonstration of their essential goodness—a fatal motive in the Vietnamese enterprise, as hospitals, dispensaries, GI-built schools, improved seed strains, toothbrushes, surplus canned goods were strewn over the bombed, defoliated country, proving good intentions. If this sincere delusion had not been persisted in, the war could not have continued. With the orphans, the national heart again began to swell with the familiar philanthropic sentiments; nobody thought to ask what right we had to appropriate these babies, who in fact were part of the Vietnamese patrimony. Again, we were “saving” them, from disease and malnutrition; at the same time, they were little trophies, keepsakes—war loot salvaged from the wreck of the US involvement, so costly to the taxpayer. 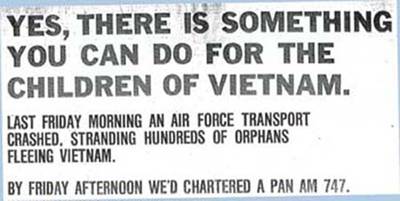 The American amour-propre was seriously damaged in Vietnam, and the orphans in the end were insufficient restitution, especially since everybody could not have one. In any case, our generous image, not wholly inexact (Americans are kindly and helpful), is a dangerous reflection of our sense of national superiority, of our having more things to give away, like the ballpoints Nixon used to distribute on the streets of West European capitals, imagining that there was still a hunger for them. The idea that some nations would not want our things or our “know-how”—which made them—is inconceivable to most Americans.
The immense natural wealth of the American continent, ready for exploitation, and the wide internal distribution of that know-how have been a baneful gift. It is not only that the indigenous profit system must keep seeking fresh fields for investment as well as new consumers, but that the feeling of being an enormous creative matrix implies notions of leadership in every sphere of activity: literature and the arts, science, space, communications; democracy is regarded as an American manufacture along with Diners Club cards, happenings, rock music, and what were once called groovy life styles. No American is immune to the conviction of having something to offer the world by virtue of this native plenitude, and rejection (as happened in Vietnam) appears so incomprehensible that quite a few of the GIs who turned against the war turned also and simultaneously against the Vietnamese. Few Americans really drop out; instead they transfer their managerial and entrepreneurial skills, and the burgeoning pride that goes with them, to marginal activities such as the health food network or LSD manufacture, in which again they are “ahead” of other countries.
One of America’s problems is an inability to see itself. Hence the concern even among intellectuals with how the US looks after the defeat and how the defeat has affected our “position” in the rest of the world, as though what has happened were as much a social snub or slap in the face as a true loss. And the concurrent hope that the loss can somehow be turned into a gain, something positive, which would be true if whole peoples were able to revise their unthinking estimate of themselves, that is, break with all their habits.
There is no doubt that Germany was profoundly changed and sobered by the Nazi defeat, but it would take an atomic catastrophe, I often think, for the US to recover from the American way of life—the production-consumption cycle that has become an almost biological fact, resting as it does on rapid obsolescence and replacement. Intermittent elections add to the helpless feeling of stasis and eternal recurrence. You watch the same old candidates—Reagan, Jackson, Kennedy, Humphrey, Wallace—on your new color TV set. Anybody in his right mind would rather have it the other way around: fresh voices and faces on a quavery senior citizen TV screen. But for some un-Marxist reason, the constant restyling of the objects among which we live has no effect on the political superstructure, politicians being sent to the junk heap of history at a much slower rate than cars and ice-dispensers.
I can think of no way in which US political life can now be revitalized. The wistful idea (in which I have fitfully shared) of a “use” to which the Vietnam experience could be put shows that our faith remains a naïve, mechanical utilitarianism, which has no room in it for death in private life or tragedy in politics.